Methods: Retrospective review of transmission of SARS-CoV-2 among 4,779 crew of an aircraft carrier between March 11 and May 18, 2020. All crew who tested positive by RT-PCR were placed in isolation and underwent symptom monitoring twice a day. Limitations: Contact tracing did not include other potential contacts. 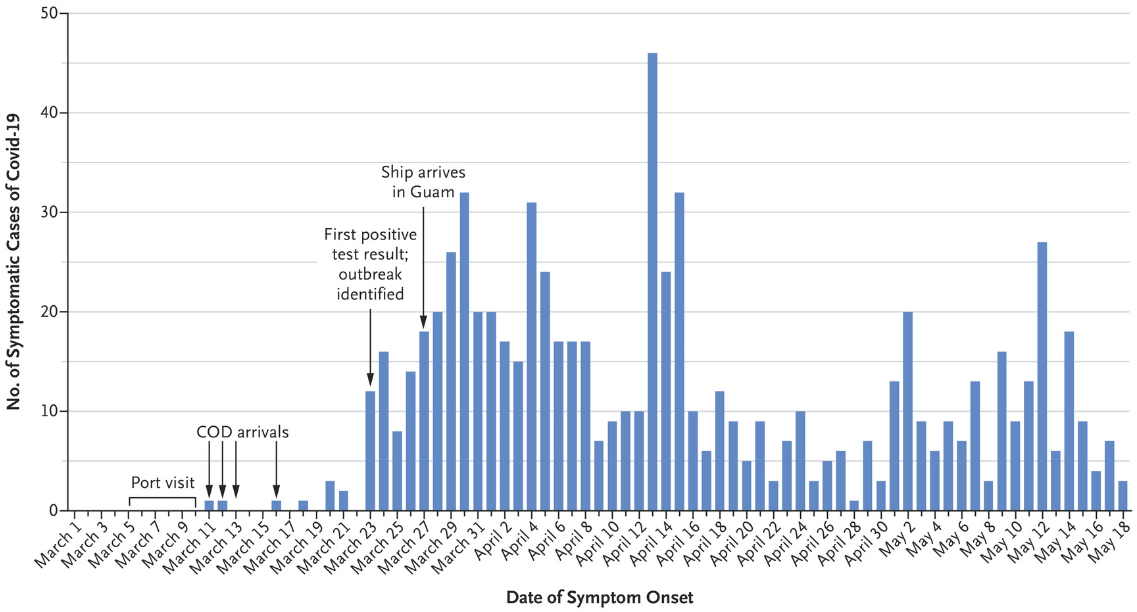 Note: Adapted from Kasper et al. COVID-19 cases among aircraft carrier crew between March and May 2020. COD, carrier onboard deliveries of personnel, supplies and mail. From NEJM, Kasper et al., An outbreak of COVID-19 on an aircraft carrier, Copyright © 2020 Massachusetts Medical Society. Reprinted with permission from Massachusetts Medical Society.

Methods: A study in Marine recruits who self-quarantined 2 weeks at home and then were under supervised quarantine (double occupancy sleeping rooms, shared bathrooms and dining halls) at a closed campus for another 2 weeks between May 15 and July 14, 2020. While at the closed campus, they were tested by RT-PCR on days 0-2, 7, and 14. Phylogenic analysis of viral genomes were conducted to assess transmission routes. Limitations: On-campus quarantine was done with 2 persons per room and interactions were not closely tracked; 1,554 (45.7%) recruits were retested only on day 14.

Implications from 2 studies Kasper et al. & Letizia et al.: In close quarters, rapid extensive transmission of SARS-CoV-2 may occur. To protect service members, Michaelexternal icon, N. suggests a mandatory 14-day quarantine prior to confinement in close quarters, but Letizia et al.external icon suggest that even two weeks of prior self-quarantine plus two-weeks on-base quarantine was not adequate. These data provide evidence of the need to test asymptomatic individuals, particularly when dealing with young, healthy individuals, especially in settings with close quarters.