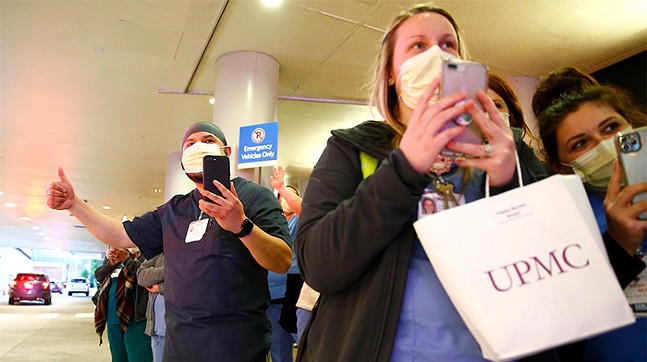 In honor of National Nurses Day on Wed., May 6, 2020, Public Safety held a procession of approximately 75 vehicles around UPMC Presbyterian and Allegheny General Hospital thanking those first responders on the frontlines in Pittsburgh.

At a press conference last week, UPMC officials claimed that Pennsylvania was seeing a "less deadly" strain of COVID-19 than the one the state, and the rest of country, experienced at the beginning of the pandemic. But an investigation by Spotlight PA found that there is insufficient research to support the claim.

"You may have heard in the news that there is a dominant global strain, one that seems to transmit easier but is less deadly. That's the strain we're detecting and our data supports those characteristics," said Graham Snyder, UPMC's Medical Director of Infection Prevention and Hospital Epidemiology, at a press conference on July 9.

Spotlight PA spoke with several virologists and epidemiologists and concluded that the claim of a "less deadly" strain "is not supported by current research," and spoke with a UPMC official who cited scientific studies that contradicted the claim.

When contacted by Spotlight PA for comment, UPMC spokesperson Allison Hydzik cited one study that contradicted Snyder's claim, and another study that concluded that "further studies will be necessary to determine the impact of this change on the nature and severity of COVID-19.”

Throughout the pandemic, UPMC has been quick to offer expertise about the virus, but hasn't always followed directives from the state. In March, after Gov. Tom Wolf (D-York) shut down elective procedures, UPMC continued to perform them, despite an open letter from nearly 300 staff members imploring the hospital system to stop elective procedures.

Concerning its opposition to Wolf’s order in March, UMPC utilized a similar justification as they did on July 9 and said that coronavirus wasn’t serious enough to stop elective procedures. At the time in mid-March, UPMC officials said there were only five known coronavirus cases in the Pittsburgh area and so it wasn’t worth stopping the surgeries, which are highly lucrative for the health-care giant. The cases then proceeded to rise quickly and by the end of March, Allegheny County was seeing nearly 50 coronavirus cases a day. Today, Allegheny County counted 140 positive coronavirus cases and 12 hospitalizations.

UPMC is one of the largest employers in Pennsylvania, and easily the biggest hospital chain in the state. It’s sway is large, and many of its statements and press conferences concerning COVID-19 have produced headlines, as well as received backing from powerful politicians like U.S. Sen. Pat Toomey (R-Lehigh).

But as Washington Monthly magazine points out in a recent investigation, UPMC has a long history of being accused of putting profits above the public interests of its community. For the Monthly, Phillip Longman and Udit Thakur point out that UPMC could easily afford to shut down elective surgeries and comply with stricter restrictions as the nonprofit has “command reserves amounting to $5.5 billion in unrestricted cash and investments.” The Pittsburgh Post-Gazette recently reported that UPMC president Jeffrey Romoff’s 2019 salary was nearly $9 million. His salary has increased about 40% since 2014.

Washington Monthly also ranks hospitals on their ability to save lives, save money, and serve everyone. UPMC’s flagship hospital, Shadyside Presbyterian, is consistently lauded for it ability to bring in “well-heeled patients from around the world,” but in terms of civic leadership, its rankings are dismally low: 3,138 out of 3,285 hospitals ranked nationwide. And this goes the same for the majority of hospitals in its network.

UPMC, as a nonprofit, is supposed to further the public good in exchange for tax-exempt status, according to state law. Critics, including Pennsylvania Attorney General Josh Shapiro, have said the large nonprofit is not fulfilling its charitable mission. According to Shapiro’s office, UPMC receiving tax-exempt status costs Pittsburgh’s schools and local-area governments a total of some $40 million per year.

According to the Monthly, UPMC’s health insurance division took in roughly $800 million more in premiums and other enrollment revenues than it paid out in medical claims in 2019.

And while UPMC profits continue to rise, workers say their labor rights are being affected. According to Nila Payton, a longtime employee at UPMC, many employees at UPMC are not being paid adequately and some are even going into medical debt because of hospital bills from UPMC itself. UPMC employees have health-insurance through the nonprofit, which created its own insurance arm in 1997, but for some, the co-pays and out-pocket-costs are too high.

“Many of my coworkers, none of which make a living, let alone thriving wage, are also in debt to UPMC, due to skyrocketing health-care prices and predatory clauses in their insurance,” Payton told Pittsburgh City Paper in April 2019.

For decades, UPMC has squashed unionization efforts among employees. UPMC has promised to raise all employee’s wages to at least $15 an hour by 2021, but a recent University of Pittsburgh study of hundreds of hospital workers in Pittsburgh shows that even those making $15-18 an hour face many financial hardships.