Nikkei Asia is tracking the spread of the new coronavirus that originated in the central Chinese city of Wuhan.

To see how the disease has spread, view our virus tracker charts:

3:20 p.m. Malaysia says it will host the first-ever virtual summit of leaders from Asia-Pacific Economic Cooperation nations in November, amid political uncertainty faced by Prime Minister Muhyiddin Yassin. Doubts had arisen earlier as to whether the summit would go ahead due to the pandemic. New Zealand, which is hosting next year's APEC summit, has said it will use virtual platforms.

1:00 p.m. Social distancing and lockdowns in Australia not only slowed the spread of COVID-19, they also saved the lives of about 400 people in the country who would have been expected to die in June from respiratory illnesses such as pneumonia, a research paper shows. The Actuaries Institute said there was a shortfall between verified deaths and the number expected during the midwinter month, which it concluded was due to a decline in respiratory illnesses.

9:40 a.m. China reports 20 new confirmed and 161 new asymptomatic COVID-19 cases for Sunday, following a surge in symptomless infections in the northwestern Xinjiang region. All new confirmed cases originated overseas. Of the 161 new symptomless infections, which China does not classify as confirmed cases, 137 were locally transmitted. Xinjiang's Kashgar on Saturday started testing its 4.75 million people after detecting an asymptomatic infection at a garment factory. Another 137 asymptomatic cases were reported on Oct. 25 amid that testing.

8:15 a.m. Australia's state of Victoria, the country's new coronavirus hot spot, reports zero cases for the first time since June, according to Reuters. The state on Sunday delayed the easing of COVID-19 restrictions because of a fresh outbreak in Melbourne's northern suburbs. 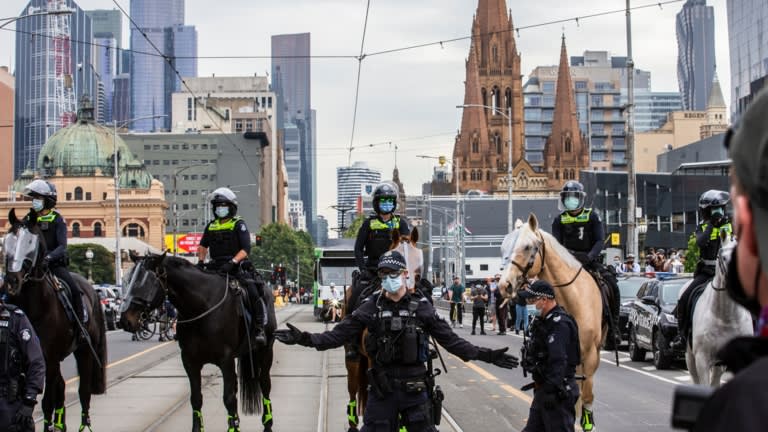 Police officers on horseback and on foot stand on guard in Melbourne during a coronavirus demonstration on Oct. 23. About 200 to 300 protesters gathered for a Freedom Day rally in opposition to COVID-19 restrictions. © AP

4:50 a.m. France registers a record 52,010 new confirmed infections over the past 24 hours on the heels of a previous all-time high of 45,422 on Saturday, as a second wave of cases surges through Europe. The new infections took France's total to 1,138,507, with the country pushing past Argentina and Spain to register the world's fifth-highest number after the United States, India, Brazil and Russia.

11:39 p.m. Bulgarian Prime Minister Boyko Borissov said he has tested positive for the coronavirus and would stay at home. He met Keith Krach, U.S. undersecretary of state for economic affairs, on Friday.

6:49 p.m. U.S. infectious disease expert Anthony Fauci told the BBC it would be clear whether a COVID-19 vaccine was safe and effective by early December, but that more widespread vaccination would not be likely until later in 2021.

11:57 a.m. Marc Short, the chief of staff for U.S. Vice President Mike Pence, has tested positive for the new coronavirus, a spokesman for the vice president says. Vice President Pence and his wife tested negative.

10:38 a.m. China's health commission reported 15 new coronavirus cases in the mainland for Friday, down from 28 cases the previous day. All of the new infections were imported, according to a statement by the commission.

7:49 p.m. Istanbul's mayor Ekrem Imamoglu said he has been hospitalized after testing positive for coronavirus and suffering a fever, Reuters reported. Istanbul's American Hospital said in a statement that Imamoglu, an opponent of President Recep Tayyip Erdogan, was admitted to the hospital after displaying symptoms of upper respiratory tract infection.

7:16 p.m. Malaysia reported 1,228 new coronavirus cases, a record daily jump since the start of the pandemic, bringing the total number of cases to 25,742. The health ministry also said seven new deaths were recorded across the Southeast Asian country.

5:12 p.m. The Philippines' health ministry recorded 2,057 new coronavirus infections and 19 additional deaths. In a bulletin, the ministry said total confirmed cases have increased to 367,819 while deaths have reached 6,934. The Philippines has the second-highest number of COVID-19 cases and deaths in Southeast Asia after Indonesia.